In 1945 Gawie and Baba Bothma settled on the farm .

He was one of the first founding members to breed pure Bonsmara cattle.

In 1950 he built a dam wall to collect the run-off was registered for the irrigation of 20ha of land.

This dam was registered as the Kgoro Dam.

In 1980 Emil Bothma carried on farming at Kgoro with crop farming and commercial cattle.

In 1985 he started farming more intensively with and started a feedlot, namely Koodoolake Voerkraal Trust. 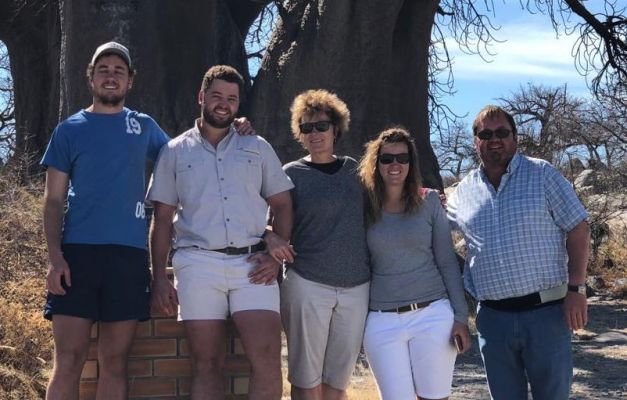 They had three children, namely Bea, Heinrich and Philip.

In 1986 Makgoro Lodge was built on the banks of the Kgoro Dam.

Since then the game farm has expanded to 1 800 ha of beautiful Kalahari bush veld and grasslands.

In 2017 Heinrich joined the farming business.

So far, 3 generations of Bothma’s have been established in the heart of the Molopo on the farm Kgoro.

Currently the enterprise is being run as an intensive and commercial cattle farm with Makgoro Lodge as a game reserve.